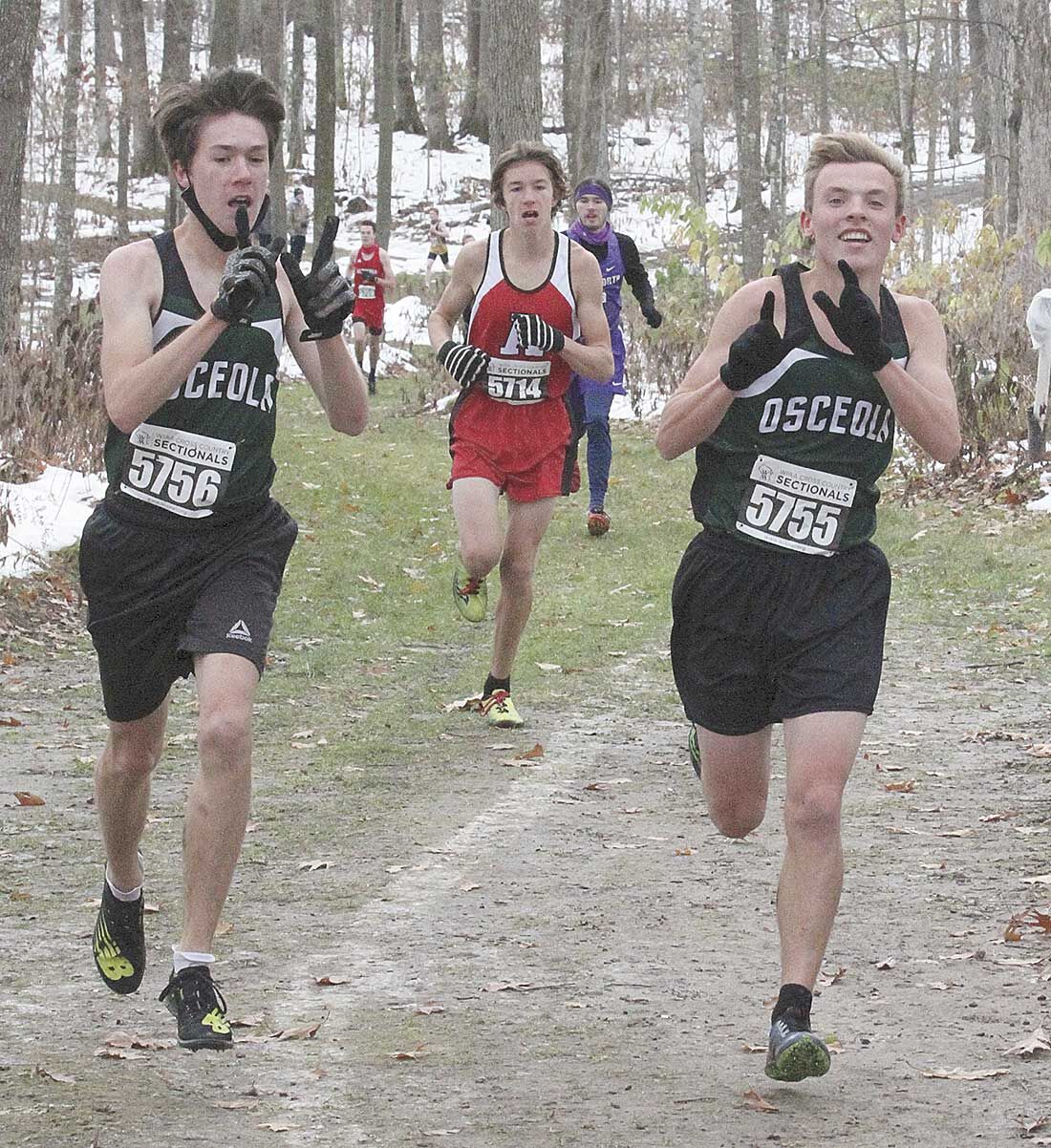 Chieftain runners Mason Hancock and Jacob Hall look comfortable for Osceola in the Sectional race at Barron. Osceola placed first as a team and will compete at State this Saturday.

Chieftain runners Mason Hancock and Jacob Hall look comfortable for Osceola in the Sectional race at Barron. Osceola placed first as a team and will compete at State this Saturday.

It has been a different sports season this year due to the pandemic but for the Osceola Chieftain cross country team, the more things change, the more they stay the same. This season travel has been restricted for all Wisconsin sports and for cross country there is a different playoff format. This year teams were assigned to Sub-Sectionals first before they competed at Sectionals and a chance to go to State. This was done to minimize the number of teams at the Sectional meet.

Osceola apparently has taken a liking to the new format as both the boys’ and girls’ teams placed first at both the Sub-Sectional that was held in Amery and the Sectional hosted by Barron. Another common theme for the Chieftains is that they had the top runner in both the boys’ and girls’ races at both meets. Junior Quinn McDonald raced to first place in Amery and Barron as did sophomore Rachel Ulrich. This is the second straight season that Ulrich has placed first at Sectionals.

The Osceola girls had their way at the Sectional meet with a comfortable win over second place Hayward, who also advanced to the Sectional meet. The Chieftains placed first among the eight schools competing setting up the Sectional finals. At Sectionals OHS had to deal with season long nemesis St. Croix Central who has been hot on their heels at virtually every meet this year. Osceola, with a great team effort, held off a gritty SCC team to claim the top spot by four points. Behind Ulrich’s first place effort for Osceola was Lauren Ellefson (5th), Alli Fogelberg (7th), Merri Johnson (9th), Adelyn Ellefson (13th), Chloe Backlund (14th) and Arieana Hayton (19th). The top team finish was earned by all seven runners.

“I am extremely happy with our team’s performance at Sectionals and glad that I was able to contribute to our first place finish,” Ulrich said. “The whole team has worked so hard all season and it is really satisfying to see it paying off in a big way.”

The Osceola boys had an easier time of it at both Sub-Sectionals and Sectionals with a 27 point advantage over second place Hayward at Amery and a 24 point win over the same second place team at Barron.

For the OHS boys’ team it was also a complete team effort. McDonald won both of the races but the second through seventh finishers for the Chieftain boys has varied quite often. When one of the runners is not having his best day there is always a teammate there to pick him up. After McDonalds first place finish at Barron it was Ethan Hall (5th), Kolten Heimbach (6th), Jacob Hall (8th), Mason Hancock (9th), Dylan Salewski (11th) and Brayden Bradway (14th).

“This race was big confidence boast for each and every one of the boys,” McDonald said about the Sectional win. “We all have been working so hard to get to this point and to win the meet in the convincing fashion we did it amazed me. We all know that the work isn’t over and we will need to bring that intensity and confidence into the State meet to have the chance to come back with something new for the trophy case.”

Osceola will compete at the State meet in Colby on Oct. 31. There will be 12 teams competing for the State title. State will be run in three waves in order to have fewer runners in each given race. The Chieftain girls placed second at State last year.